home page | events | Once Upon a Time… Man

Once Upon a Time… Man

If we wanted to translate the 315 000 years of the history of Homo sapiens – i.e. the age of its oldest remains found in Morocco – into the face of the clock, the last 70 years would be less than one tick of the second hand. That is the fastest second in the whole human hour.

The great acceleration – as it’s called by Anthropocene researchers – did not come out of the blue. It is not like we have been going at a snail’s pace for 3599 seconds to suddenly speed up and chase the midnight rabbit.

The history of humankind has seen a lot of accelerations. Nearly 60,000 years ago (11 minutes), our ancestors spilled out of Africa, invading other continents. Around 11,500 years ago (little more than 2 minutes), the Holocene began and, in the Middle East, someone got the idea for the first time to breed and grow instead of hunting and gathering. Over 400 years ago, a handful of people stopped looking at reality in magical terms and started to apply the scientific approach. Finally, 250 years ago, European inventors used coal as fuel to propel the steam engine.

But no other second of the 11 minutes has passed so quickly as the last one.

The number of people has increased twice and a half times.

We are burning so much coal, oil, and natural gas that we have emitted two previous centuries’ worth of carbon dioxide.

We have produced so much plastic that we could laminate the whole globe.

The amount of concrete we have produced would be enough to cover the planet with it.

We have strewn the world with soot, phosphorus and nitrogen compounds, heavy metals, poisonous organic compounds, and radioactive elements from nuclear explosions.

We have changed the Earth to such an extent some scientists claim we should include a new epoch into the international stratigraphic chart, which is used by geologists to divide the 4,6 billion year of Earth’s history into eons, eras, periods, epochs, and stages.

TheAnthropocene. The epoch of humankind is thought to have begun in the mid 1900s. It resulted in an environmental disaster – overpopulation, global climate change, and the sixth extinction event.

How does the story end?

Experience is not just something that happens to us, claim geneticists. 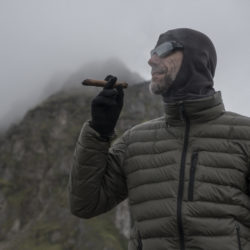 poprzedni
następny
Designed by Studio Spectro
Privacy policy and protection of personal data. The www.literackisopot.pl website uses ‘cookies’ collecting selected data on the users and their preferences. They are, however, not used to process or retain personal data, but only the information which allows us to: • deactivate the banner with the information on the ‘cookies’ used on the website, • create website usage statistics and help measure the effectiveness of advertising campaigns. The www.literackisopot.pl website does not use ‘cookies’ to reach users via mail, e-mail, or phone. ok, I accept ✚