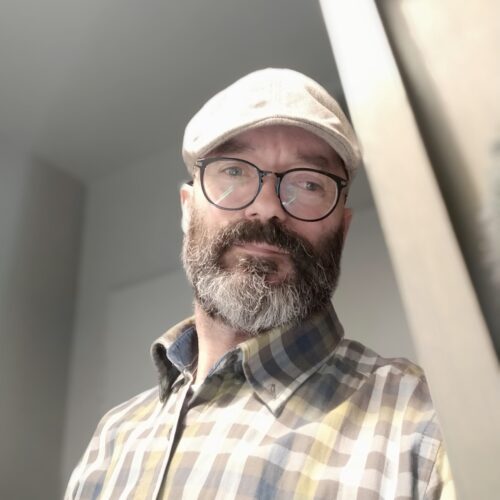 Born in 1970 in Poznań and a graduate of the Department of Scandinavian Studies (Finnish) at Adam Mickiewicz University, he is a translator of Finnish and English literature. He started his career when he was still a student. His first translation from English was published in 1996 and the first translation from Finnish in 2004. He has also worked as an interpreter at a bus factory in Wrocław and at the Aker Yards shipyard in Helsinki.

He has been freelancing since the beginning of the century and makes a living from translating literature for Polish publishing houses, both big and small: Rebis, słowo/obraz territoria, Świat Książki, Czarne, Wydawnictwo Literackie, W.A.B., Książkowe Klimaty, Zielona Sowa, Pauza, Wydawnictwo Poznańskie, Dwukropek, and Marpress. In 2015, he started his own Officina Wolny Tor which for several years published contemporary Finnish classics in e-book format. He is also involved in translation trainings in Poland and Finland.

In 2008, he won the Literatura na Świecie magazine’s award in the ‘new voice’ category for his translation of Finnish writer Daniel Katz’s novel Laituri matkalla mereen (Kobieta pułkownika, Czarne, 2007). In 2017, the ministry of culture of Finland awarded him the annual national award for the translators of Finnish literature.