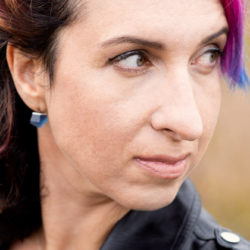 Born in 1979 in Warsaw. Phd. A graduate of Cultural Studies and Gender Studies at the Warsaw University. A writer, publicist, social activist and promoter of reading. A member of the Union of Polish Writers and the Union of Writers Association. Curator of festivals and literary initiatives (Apostrophe -International Literary Festival, OFF Literary Café, discussions and meetings with authors). She was a lecturer at the Institute of Polish Culture at the University of Warsaw and at the Writing Machine – the school of Writing. Columnist of Polityka, Pani, Wysokie Obcasy, Gazeta Stołeczna and many web sites. She co-hosted the literary programs "Cappuccino with book" and "Forget- recovered" in TVP Kultura. She is currently co-organizing the "Barłóg literacki" on You Tube channel. Her texts appeared in collective books and in many catalogs for exhibitions of contemporary art and theater programs (including the Grand Theater - National Opera, Gallery Bunkier Sztuki, Nobel Museum in Stockholm). She publishes guest appearances in the Polish and foreign press. Her scientific texts have been included in more than 20 studies and collective books. Scholarship holder Homines Urbani 2008, Institute Books from Lithuania 2009, Ministry of Culture and National Heritage 2010, City of Warsaw 2010, Goethe Institute 2010. The author of the novel Pocket Atlas of Women (Ha! Art 2008), Dzidzia -Baby (Świat Książki 2009), Cwaniary/Smart Girls (Świat Książki 2012), Jolanta (Znak 2015). The Sorrow of a cinkciarz (Od deski do deski 2016) and historical book Women's Warsaw (Polityka's Library 2011), Fairy Tales for Children Nieśmiałek (Muza 2015) Dino Bambino (Wytwórnia 2018), a collection of columns Mama has always right (Mamania 2012), a collection of short stories, Please enter. Prison, untrue stories (Nowy Teatr 2012) and In Wonderland (Znak 2014), conversation Women who are fighting. Interviews with women practicing martial arts (GW Foksal 2017). Her latest book Tyłem do kierunku jazdy (Znak Literanova 2022) was published in August.