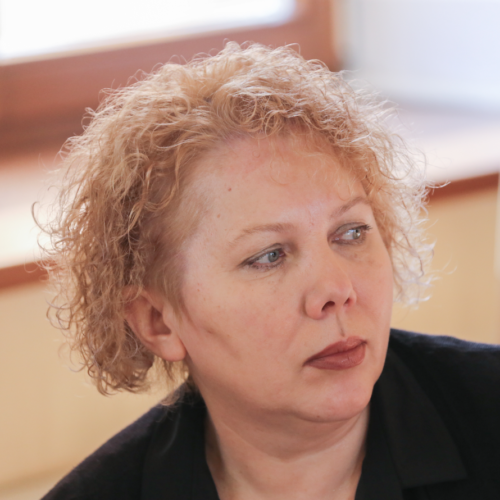 A literary theorist, Schulzologist, translator, researcher and academic staff member at the Department of World Literature and Slavonic Languages at the Drohobych State Pedagogical University, she is the head of the Ihor Meniok Polish Research and Information Centre at the same university. She is also the initiator and director of the Bruno Schulz International Festival in Drohobych, and the president of the Bruno Schulz Museum and Festival Foundation (Drohobych, Ukraine). She is a three-time scholarship holder of the Gaude Polonia Programme of the Polish Minister of Culture and National Heritage (2006, 2008, 2012). For organising the International Bruno Schulz Festival in Drohobych, she received the For a Good Cause medal of the Lviv Chapter of the Order of "Ji" (2009). She was awarded the Decoration of Honor Meritorious for Polish Culture by the Minister of Culture and National Heritage of the Republic of Poland (2012) and the Carpathian Europe of Shared Values award by the Europe-Ukraine Forum (2020). She is the author of numerous scholarly publications, the editor of a series of volumes with the International Bruno Schulz Festival materials, and other collective publications. She has translated Schulzological texts into Ukrainian, as well as Bruno Schulz's Szkice krytyczne and Agata Tuszyńska's book Narzeczona Schulza. She has also translated Jerzy Ficowski’s Baśnie Cygańskie currently awaiting publication. Together with Ihor Meniok (1973-2005), she established the Ihor Meniok Polish Research and Information Centre at Drohobych State Pedagogical University and established the Bruno Schulz Museum in the writer's former grammar school office. They also initiated the International Bruno Schulz Festival in Drohobych held every two years since 2004, as well as the Second Autumn - an annual literary and artistic project dedicated to Schulz.